It’s so cliché–Woman becomes harried mother of small children, loses all sense of style (provided she had one to begin with…), goes out in public in saggy yoga pants and a stained t-shirt. Said woman fights to reclaim her sense of self by finally prioritizing personal hygiene and putting on “real clothes”.

I’ll admit I’ve fallen hard and fast into that cliché, for real. Showers feel like a rare day at the spa.  That is, if the spa includes tiny voyeurs who come in every two minutes to tell you that they’re hungry or pooping or Queen Elsa or whatever. (Theoretically. I’ve never spent a whole day at a spa. But I’m totally game to try…) I’m pretty sure my makeup would have required carbon dating to figure out its age. I had literally no clothes that fit after my son (kid #2) was born. I bought a couple pairs of sweatpants and some cheap-o t-shirts to keep me clothed until the pregnancy weight disappeared again.

There’s a long story for you. Suffice it to say that I’ve had to buy new (bigger) pants several times since then. Pre-existing autoimmune chronic fatigue and years of sleep deprivation don’t mix well, if you know what I’m saying. (Cough, cortisol, insulin, cough) I’m still crawling out of that deep, deep hole with extra weight and a complex about sleeping as my souvenirs.

So there is definitely some work to be done in the personal appearance category.

The problem for me is that I DON’T CARE. Most of the time. It truly makes me no difference if someone at the grocery store thinks my outfit or my nasty three-day-old mom bun is acceptable. I’m too busy obtaining sustenance for my family and, frankly, I’m still too damn tired to care.

But I kind of want to care.

At my age (early 30s), it’s probably about time to figure out my own sense of style–beyond my comfiest pair of leggings and a sweater that self-identifies as a blanket (pic below of my sick day uniform as such…😬). I mean, I’m pretty much a blank slate other than my obsessive love of black and gray. It sounds fun to discover what I truly like! Maybe I’ll fall in love with [gasp] color! My black-obsessed brother would hate that… 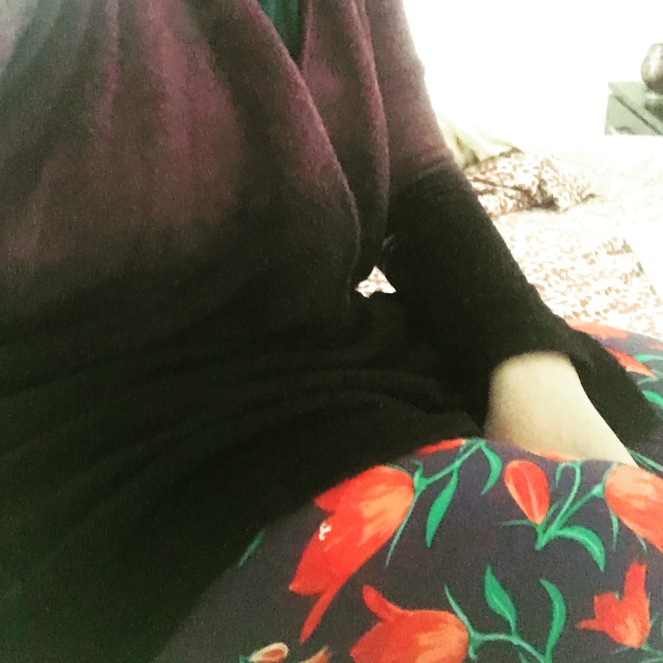 So because I need more projects (No, no I don’t.), I am commencing Operation DeFrumpify: An Attempt to Care About How I Look. Let’s see if that helps me get my groove back, shall we?

Let’s break this down into actionable steps. Because #overlypractical.

I’ll post my progress (or regression 😬) on Instagram @roguepharmacist. Stay tuned for when I eventually make an effort and take a picture!

What are your defrumpification goals? Any amazing tips or tricks? Should I just give up before I get started? 😂