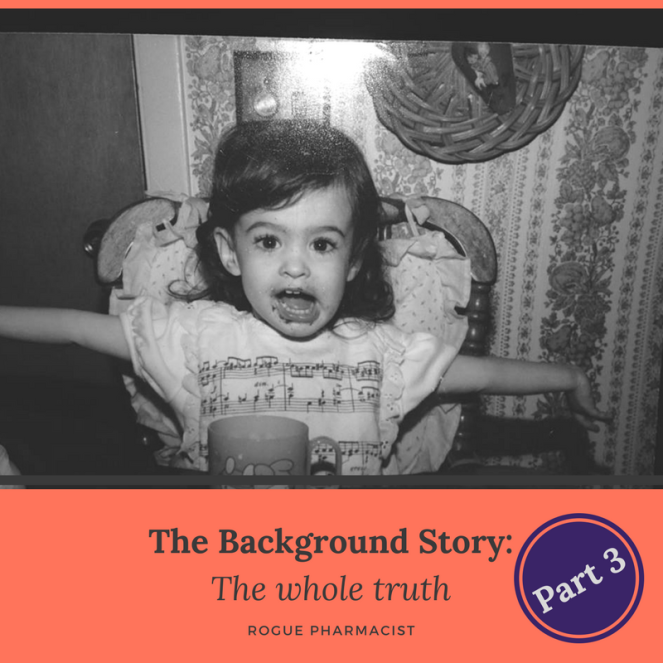 We continue the story after identifying autoimmune risk factors in Part 1 and talking about diagnosis in Part 2. Now on to Part 3, which could be called: This Isn’t as Simple as I Thought It Would Be.

Coming out of my GI consult, I was actually excited to learn more about Celiac Disease. Just stop eating gluten, whatever that is! Easy as pie! Oh, wait… pie…

I was told that I would need an EGD (upper endoscopy) and biopsies to confirm diagnosis and also to balloon my constricted esophagus back open. I only had to wait a couple weeks instead of more months. #glorybe

In the meantime, the primary care office called back with the results of my toe biopsy. It was a “nonspecific inflammatory rash”, which is code for “we really have no idea”. Helpful. I asked if it could be dermatitis herpetiformis, a skin manifestation of Celiac Disease, and they said, “Hmm, that could be.” Moving on…

The endoscopy was interesting.

I’ve always reacted oddly to medications, especially anesthetics, benzodiazepines, and antihistamines. They don’t take effect until much later than expected and they hang around for forever… I am pharmacokinetically challenged, I guess.

I could tell you about the time I walked into a wall a week after oral surgery (benzos), or the time I kept falling asleep mid-conversation after taking meclizine in anticipation of a bumpy flight (that didn’t kick in until we were back on the ground. Glad I wasn’t driving home from the airport…).

Being the pharm nerd that I am, I wanted to know which drugs they were using for conscious sedation during the EGD. Which means that I was concerned when they said that they usually used Demerol and Versed. I would have much preferred something like fentanyl with a shorter half life, but who was I to protest…

So the end result was that I remember the EGD, though I don’t remember much from the day or two afterward (other than my friends telling me that I looked like crap when I showed up to class the next day. Thanks, guys! Love you, too! LOL).

By the way, if you’re wondering what an EGD feels like, it’s kind of like choking on a garden hose. Rumor has it that they don’t use sedation for EGDs in Europe. Hats off to you, hardy Europeans. It’s not an experience I’d love to repeat.

What to do now?

The dietitian consult idea was somewhat of a debacle. I called to schedule the appointment only to be told that I would have to pay out-of-pocket for the visit. My insurance only covered dietetic services for a diagnosis of diabetes. NOT A DISEASE THAT IS ONLY CONTROLLED BY DIET. Makes sense.

So I told them that I’d schedule it anyway and figure out how to pay for it later. Then she started asking me questions about Celiac, and it would not be the last time I heard these questions:

“How do you spell that?”

Not exactly confidence-inspiring. I canceled the consult, thanked her for her time, and went on my merry way armed with a laptop, the internet, and an uncanny ability to follow online rabbit trails.

Using only my trusty internet searching skills, I learned everything there was to know about going gluten-free. It seemed pretty straightforward. I had a “last supper” Chik-fil-A sandwich at the mall, and I got started.

It didn’t seem too difficult at first. I’d had a lifelong love affair with any type of rice, and I’d naturally avoided most bread and pretzels and donuts and cake. I know, I’m weird like that. Buh-bye, bagels.

I learned to read labels like a fiend. I memorized all the pesky pseudonyms gluten liked to hide behind. I tried to communicate with the nice guy at China House to figure out if I could still eat my favorite Szechuan chicken (No, no I could not. Tear.). I thought I was doing a thorough job.

And I started feeling better. Sort of.

The panic attacks were fewer and farther between. My guts didn’t wrench and twist and threaten to immediately expel their contents as often. Everything just kind of toned it down a bit.

Which was great, but not GREAT.

I spent a lot of time combing the celiac.com forums to see what I was doing wrong. There were all these people there who had to be suuuuuuper duper strict about what they ate and cross-contamination and even some doing some crazy diet called GAPS that I would never consider.

My research would soon become all-consuming as I looked for answers to my ongoing symptoms. I stuck to the known and the proven. I read all available literature about refractory Celiac Disease, assuming that I was in that terrifying category. I presented my PharmD seminar on Pharmacotherapeutic Options in Celiac Disease. I sought out new doctors who would know more and do more.

I did everything my scientific little heart knew to do.

And in the end, I had to go rogue.

One thought on “The Background Story: Part 3”