I used to think I was a somewhat seasoned traveler. Maybe not curry or cayenne, but a nice blend of sea salt, garlic, and some green herbs.

When I decided to go to England for fecal microbiota transplant, I realized just how far removed I’d become from the jetset.

I’d only flown once in the age of smartphones, and the last time I flew across the Atlantic, I had to use minutes on a prepaid calling card to talk to my mom from a landline when I got there. #itsbeenawhile

Planning that trip was a beast. So many details. To top it all off, my brain felt like mush because of the supplements I was taking pre-transplant. (I know a lot of us in the autoimmune community often feel that way. #spoonie)

So, I now you my tips and travel hacks to make your next trip a little less stressful.

(I plan to write a post specifically about planning a medical travel trip to Taymount Clinic in the future, since there seems to be very little info online.)

I knew that paying extra to breeze through security (at least on the way there) would be worth it.

Of course, as soon as I mentioned that I was doing TSA Precheck, some trying-to-be-helpful jerkface (cough *my brother* cough) told me I should have done Global Entry instead because I was traveling internationally and it expedites the customs/border process.

Luckily (or maybe not so much), when I researched Global Entry, it appeared to take several months and a faraway trip to do the interview.

Not worth it to save an hour or so on one trip.

When I went to schedule an interview for Precheck, I was surprised to see that there was a nearby office that hadn’t been on the list before. I had planned to wrap it into my trip to Kalamazoo for colon hydrotherapy (another story entirely).

I went to this makeshift-looking office on the other side of town and was done within ten minutes.

My three-year-old son said he had fun. LOL

Then, we went to Costco and out to lunch. Good day.

You know what else was easy peasy? Walking right through the metal detector, grabbing my bags, and being on my way. I was kind of looking around like, “that’s it?”

But no one seemed to be chasing me down for additional inspection of the random food items in my bag, so I kept on walking.

The only negative was the rude dude who totally cut in front of me while I put my passport back in my bag. If I’d been in England already, I’d have given him a dirtier look and a lesson on queuing.

Money well spent, I tell you.

Who needs Global Entry when you can just use this app to answer the border/customs questions?

Download it, put in your passport info, answer five questions right before you get off the plane, and voilà.

I almost want to keep it a secret so the lines stay short.

O’Hare airport needs to get its sh-tuff together when it comes to organization and signage, but once I was in the right place, getting through the border was seriously no big deal.

In all my prepping and perusing, I read an article on bulletproof.com about travel hacks. I was all like, “Ooh, great idea, Dave Asprey! Use noise canceling headphones to filter out the airplane noise so my brain doesn’t have to!”

And then I realized why gajillionaire tech people have them and not me. The “good ones*” are $350! Umm… not feasible for two flights.

Granted, I could probably use them in future #momlife to filter out the whining of munchkins, but I’m not usually a headphones kind of gal.

I read reviews of some cheaper ones on Amazon, and they were just bad.

Until somehow, I ran across some that had OK reviews*. Most said the same thing that I’ll paraphrase here: “These kinda sorta work on an airplane. They’re not Bose*, but they’re aiiiight.”

At the very least, don’t forget some earplugs, especially if you have sensory issues or trouble sleeping through noise. (You’d think I’d be able to sleep through noise. I try every Saturday morning to sleep through the Paw Patrol and sonic booms of my kids jumping off the couch, but alas, I’m not that talented.) I have ear plugs in my purse at all times, just in case.  I’ve used these on a flight* and these smaller ones* in a noisy hotel room.

Update: I do use the headphones at home. They’re great for podcast listening while cooking! Too much Bluetooth exposure makes my brain feel a bit scrambled (maybe I need a tinfoil hat…), but it doesn’t bother me as much as it used to.

I can’t even tell you how much this charger* saved my life while traveling. My iPhone is a couple years old, and battery life isn’t the greatest. I used my phone for all kinds of things from boarding pass to navigation to entertainment. It could NOT die on me.

I figured out that this charger could charge it up fully at least once and partially again after that. Total lifesaver when you need to figure out which late night train will get you “home”. Or you’re bored on an old school plane without screens. Or you first arrive at your AirBnB in England in the middle of the night and realize the power converter you brought doesn’t work.

I’m not going to rave about Sea Bands* and say that they, in themselves, prevented any and all motion sickness while traveling, but I think they did something. For the price, they’re worth a shot.

I think that acupuncture and acupressure are extremely valuable healing modalities. Sea bands work by activating an acupressure point in the wrist that can help prevent motion sickness. Make sure to put them on BEFORE you’re at risk for feeling sick!

Wait, you can bring food on an airplane?

Yes, yes you can.

I’ve had so many questions about what I brought and how I got it through security that it may merit its own post someday. Suffice it to say that solid food is no problem as far as security goes. You may have trouble with customs/border force, but I did not. (Whew.)

Some of my favorite meals/snacks were:

Hot tip- I like to bring my own glass water bottle* with tea bags to fill with hot water once I’m past security. Add a collagen packet* and BAM, delicious and nutritious herbal tea.

I knew that I would be coming home from England with more crap than I left with. Literally. I brought implants home with me.

I bought this bag from Amazon to bring home the extras. It’s lightweight, easy to zip, and comes in purple, so I had to get it.

Seems obvious, but a backpack is a super handy “personal item” when traveling. I needed both of my hands for the rest of my intense luggage. I can’t even imagine how much a backpack would be necessary when traveling with children.

I knew I wanted a backpack for the actual travel portion of my trip, but I couldn’t find my old one (from my Freshman year of high school… #theydontmakethemliketheyusedto)

I only had three days before I left, so I turned to my trusty friend, Amazon Prime. This backpack came highly reviewed and was right in my price range. I love the gray fabric and the fun striped lining! I just wish it had more pockets. I feel like putting my stuff in there was like throwing a rock into an abyss, never to be seen again. That said, it does fit a surprising amount of stuff, and the front pocket isn’t easily accessible (a good thing if you’re among pickpocketers or not paying attention).

Someone in the long “drop off your bags” line at O’Hare commented on it and asked how I liked it so far, and mentioned that she had been thinking of getting the same one. I admitted that I’d been using it for approximately twenty minutes so far, so I had no idea.

Now that it’s been on two trips, I can say it’s durable and handy!

Last but not least, I brought along a couple biohacking-esque things to help me adjust to the time difference. Though, who am I kidding, I didn’t sleep much while I was in England. (Thank you, sunrise at 4 AM).

I bought new amber glasses* so I could try and convince my body that it was night when I arrived at the airport in London. It was nighttime, but the bright fluorescent airport lights would have told my retinas otherwise. Blue wavelengths of light inhibit the body’s production of melatonin, the sleep-inducing substance the body creates when it’s bedtime. Cool, eh? 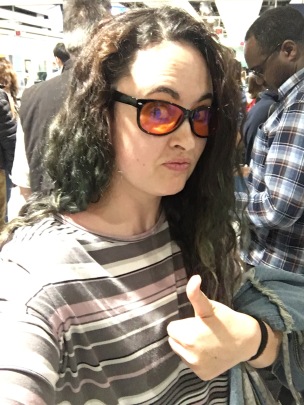 Amber glasses can block the blue so that you feel sleepy at the right time. I use even cheaper safety glasses* when I’m home, but I thought these other ones would be slightly less embarrassing to wear in public at the airport.

I also brought along some supplemental melatonin, just in case. I don’t recommend using it on a regular basis, but I was afraid of being up all night because of the five hour time change. (This is not medical advice, talk to your medical professional if this is something you’d like to try. It’s definitely not right for everybody, and it’s my opinion that the body may reduce its own capacity to make melatonin if it’s been supplemented a lot.)

Are you a seasoned traveler? What travel hacks do you have for the unseasoned?